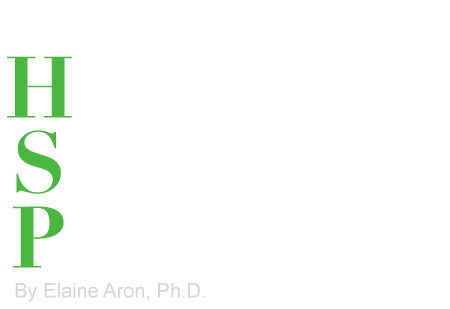 I began researching high sensitivity in 1991 and continue to do research on it now, also calling it Sensory-Processing Sensitivity (SPS, the trait’s scientific term). I never planned to write any self-help books, but those who have this trait seem to gain a great deal from knowing about it.

• Your trait is normal. It is found in 15 to 20% of the population–too many to be a disorder, but not enough to be well understood by the majority of those around you.

• It is innate. In fact, biologists have found it in over 100 species (and probably there are many more) from fruit flies, birds, and fish to dogs, cats, horses, and primates. This trait reflects a certain type of survival strategy, being observant before acting. The brains of highly sensitive persons (HSPs) actually work a little differently than others’.

• You are more aware than others of subtleties. This is mainly because your brain processes information and reflects on it more deeply. So even if you wear glasses, for example, you see more than others by noticing more.

• You are also more easily overwhelmed. If you notice everything, you are naturally going to be overstimulated when things are too intense, complex, chaotic, or novel for a long time.

• This trait is not a new discovery, but it has been misunderstood. Because HSPs prefer to look before entering new situations, they are often called “shy.” But shyness is learned, not innate. In fact, 30% of HSPs are extraverts, although the trait is often mislabeled as introversion. It has also been called inhibitedness, fearfulness, or neuroticism. Some HSPs behave in these ways, but it is not innate to do so and not the basic trait.

• Sensitivity is valued differently in different cultures. In cultures where it is not valued, HSPs tend to have low self-esteem. They are told “don’t be so sensitive” so that they feel abnormal.

Copyright All Rights Reserved © 2023 | Sensitive The Movie
Contact Us